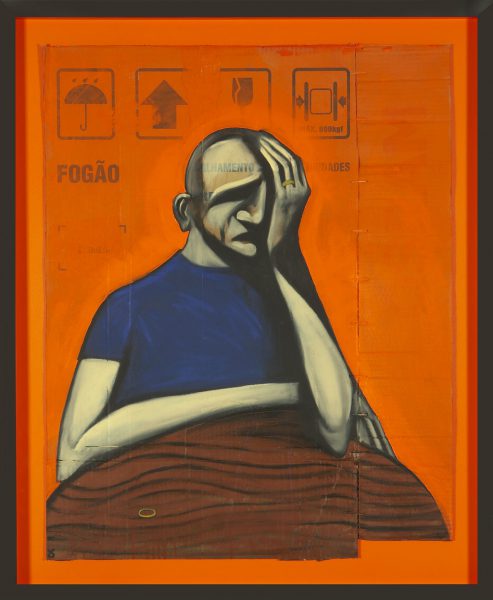 The troubled figure in ‘THE RING ON THE TABLE’ is holding his head with his left hand, the fourth finger of which bears his wedding ring.

On the round wooden table at which he sits is a discarded wedding ring, which one presumes has been left by the man’s partner.

One of a series of paintings which Neate produced during one of his residencies in São Paulo, Brazil, he has specially selected a cardboard box in order to enhance the narrative.

The box is from an oven ‘FOGÃO’ in Portuguese, which immediately implies a firey, hot atmosphere.
‘Filhamento Cuidades’ which is just legible across the man’s forehead, translates as lift or handle carefully, which clearly refers to the man’s mental state.
In addition the handling symbols show rain, a broken glass and an item under pressure.

Neate has symbolically used two pieces of cardboard which he has stapled together which compartmentalise the figure in his own isolated room.