In 2017, as part of Neate’s feature in Juxtapoz magazine, art historian Ben Jones spokein depth about his painting ‘PHOTOBOMB’

BJ:”In “Photobomb” (2016), one of your largest paintings to date, you employ lateral slices of the same reality occurring simultaneously. It’s a fascinating conundrum of a painting featuring two self-portraits, two phone screens and a mirror and what a printed reproduction might not convey is that it’s six separate pictures painted, sculpted, printed in multiple different media.  What was the starting point for this complex spatiotemporal interlacing?

AN: After studying 4 and 5 dimensional space time concepts during my period of Dimensional painting I was inspired while watching a TV police show where a gang of criminals were caught solely from their smart phone data. The police were able to access the phone data to show the time and date of the individual conversations of each gang member, their GPS location and movement and the images stored on each phone. Combining the data they were able to construct a time line of events for the lead-up to the crime, thus collapsing other possible timeline scenarios to conclude with a strong case of evidence against them. Creating a history out of data, be it true or false depending on the data source, says much about the nature of our reality.

If a beautiful woman suns herself by the beach alone, but never tells anyone, who is to know this event occurred or that if she was beautiful? The modern smart phone can capture such a moment to give ‘evidence’, but if more than one person captures the same image at the same time, who has true ownership of the moment?

No one, everyone or the individual experiencing being photographed? Currently the anomaly known as ‘the Cloud’ seems to compensate for this grey area by storing it for future reference which maybe one day be cross referenced with other images to give structure and credibility to the event having taken place. This painting makes reference to the idea that our future-past events will be reconstructed in much more accurate detail than in any other time in history so far. The painting depicts my future self entering a virtual reconstruction of an event in an earlier part of my life. Within this virtual reality concept I am able to cycle past myself and film my original self from a different viewpoint. In the painting, my original self has just noticed the older grey-haired imposter cycling towards him, much to his annoyance. The top middle canvas segment is made from aluminium to denote the “captured” universal composition for whoever takes the photo, a moment that now exists digitally. The other canvases are framed around the woman, each one holding their own individual compositions as images. At the same time they have been stitched together to create a larger narrative picture. 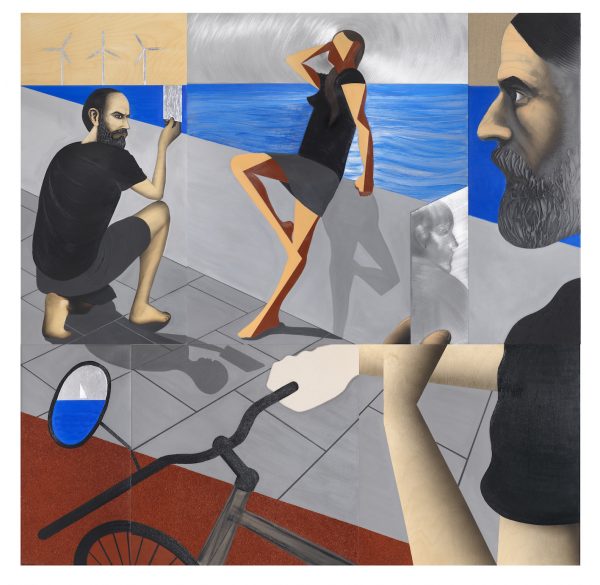