Maurice Broomfield left school at 15 to work in a factory and spent his evenings as a student in the Derby College of Art. Inspired by the drama of industry, he endeavoured to convey this atmosphere with photographs and sketches, bringing an insight to those who would never experience such things.

He is recognised as the one of the first industrial and architectural photographers to use his corporate commissions to make visionary photographic studies of the workers and the environments in which they were forced to work, his motivation stemming from his curiosity in the diversity of their occupations.

This exhibition was a retrospective of his photographic career, including industrial, architectural and travel photographs, as well as displaying many of his original camera equipment; half plates, whole plates, Rolleiflex and Hasselblads, themselves now part of a pre-digital history.

In relation to his work, Maurice Broomfield said: “I enjoy photographing people at work, and the many experiences whilst doing this have enriched my life. To be living on this planet, is to me, the greatest gift possible.”

Maurice Broomfield is the father of award winning documentary maker, Nick Broomfield; (Aileen; life and death of a serial killer and Biggie and Tupac).

“Maurice Broomfield’s photography captures the real heart of what was a booming but harsh time for the UK. Finding inspiration and creativity in gritty surroundings of every day work is inspiring in itself.” Sir Paul Smith 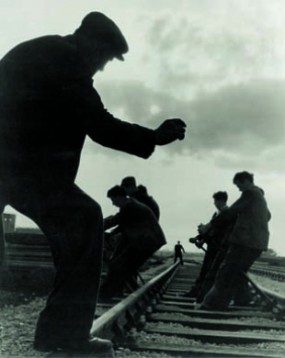