Chris Levine elevated holography from a laboratory exercise with a ‘gimmick’ and intrigue factor toa medium of intense visual power.
“Holograms are fundamentally beautiful because they are all about light, and the way it works with our senses. We read images in light data and it is the pure and coherent form of laser light which gives a hologram it’s resonant power”
HYPERVISUAL 1 was the first ever public showing of Chris Levine’s Holographic portraits.
His portraits of SEAL and BJORK portrayed the human form in a raw beauty and depth of contrast unnerving in its illusion of reality.

HYPERVISUAL 1 was the prequel to HYPERVISUAL 1.2, an exhibition which completed a tour of 12 countries with the British Council.

In 2012 his work featured in the major exhibition, Queen and Image at London’s National Portrait Gallery, featuring his infamous portraits ‘Equanimity’ and ‘The Lightness of Being’ of Queen Elizabeth 11. He has artwork in London’s Science Museum and has staged light performances with the MoMA in New York.

Chris Levine’s then company IC Holographic. London, in collaboration with Rob Munday, the inventor of the ‘HOLOMOVIE’ created the holographic card of Charles Bukowski for Elms Lesters. The holographic image measures 124 x 97mm and created from a 2.5 second ‘moving image’ from THE BUKOWSKI TAPES – 1985, 1997 Les Films du Losange. (Dir. Barbet Schroeder) The card measures 210 x 150mm and can be purchased online here

The moving image shows Bukowski lifting a beer bottle to his lips, taking a slug, then turning to put the bottle down. 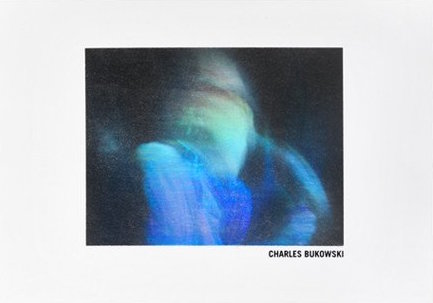